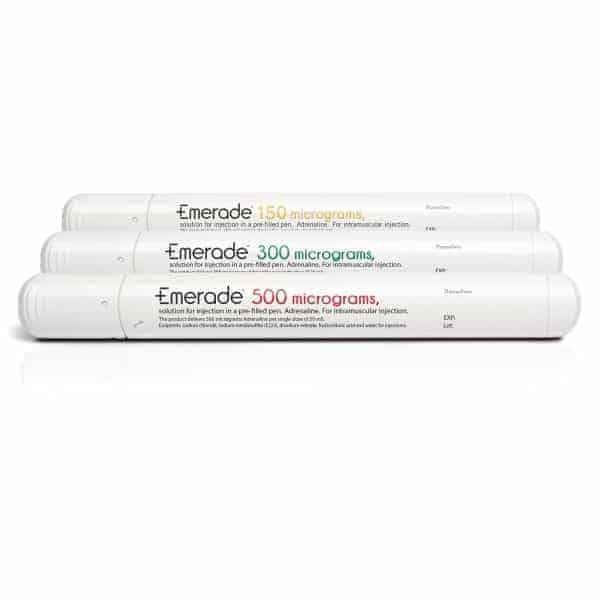 Bausch & Lomb UK limited, the manufacturers of Emerade Adrenalin Auto-Injectors has highlighted a risk of Emerade products failing to deliver a dose of adrenaline from the syringe due to a blockage of the needle.

The problem was initially found in 2018 during regular product testing by the manufacturers, and was deemed to be a rare possibility, estimated to affect just 1.5 injectors per ten thousand pens. (0.015%).

However recent information indicates that the likelihood of blocked needles is higher than first thought, estimated at 2.3 injectors per thousand (0.23%), based on lab simulations.

This notification of potential for needle blockage applies to Emerade devices of all strengths. It does not apply to the other marketed brands of adrenaline auto-injectors. The Medicines and Healthcare products Regulatory Agency (MHRA) is not recalling batches of Emerade.

If you, or someone you know has anaphylaxis, please read this report for the full press release.

All those with anaphylaxis should continue to follow best practice, carrying two in-date pens with them at all times. The risk of not being able to deliver a dose of adrenaline before the emergency services arrive is then substantially reduced, from 0.23% to 0.000529%.

Patients experiencing any problem with Emerade failing to activate should report this via the MHRA’s Yellow Card Scheme and keep the pen for further examination.

Anaphylaxis – What is it & what should you do?

Anaphylaxis is the result of the immune system – the body’s natural defence system – overreacting to a trigger. This is often something you’re allergic to, but isn’t always. Common anaphylaxis triggers include:

In some cases, there’s no obvious trigger. This is known as idiopathic anaphylaxis.

Anaphylaxis usually develops suddenly and gets worse very quickly. The symptoms typically include:

There may also be other allergy symptoms, including an itchy, raised rash (hives), feeling or being sick, swelling (angioedema), or stomach pain.

What to do if someone has anaphylaxis

Anaphylaxis is a medical emergency. It can be very serious if not treated quickly. If someone has symptoms of anaphylaxis, you should:

If you’d like to get hands on training so you’d know what to do if someone suffered anaphylaxis, contact us to book your place on our next Level 3 Award in Responding to Anaphylactic Reactions course.

Help us plant our forest:

Your course bookings have meant that, in partnership with JUST ONE Tree, we've been able to plant over 1000 trees and areas of kelp forest this year.

For each course booked, we plant a tree in a deforested area.

Our forest will remove approx. 12.38 tonnes of CO2 from the atmosphere in the next 12 months alone!